The Museum of Special Education in Levoča brought a view of the world through the eyes of eleven-year-old Tadeáš Wagner. It happened in the form of a specialized exhibition. Tadeáš has muscular dystrophy. The exhibition entitled ‘Beneficial Exhibition for Tadeáš’ captures the boy’s first works of art – Water World, Gamekeeper´s Lodge, Vlčko Village, Treble Clef, My Best Spa, and more.

Tadeáš has been drawing with his left hand since he was five years old. The dominant elements of his drawings are houses, buildings, busy streets with cars, entire cities, and also the national flags of countries. He remains faithful to these flags in every drawing. Tadeáš transfers the world he sees to a paper with a miniature depiction that repeats on all the drawings.

“Tadeáš has had his first artistic successes and his first exhibitions. His drawings won rare awards at prestigious competitions announced by the International Union of Railways (UIC) and the Community of European Railways and Infrastructure Companies (CER) last year. His drawing on the topic of Safety at Railroad Crossings won the award at the beginning of the year. There were more than 600 drawings by children from all over the world entering the competition. Tadeáš’s drawing on the theme of Christmas and the Railways succeeded among 144 drawings in a pan-European competition at the end of the year,” said Mgr. Štefánia Petreková, head of the museum.

The sales exhibition ‘Beneficial Exhibition for Tadeáš’ was opened at the Museum of Special Education in Levoča from October 15 to October 30, 2015. The financial proceeds from the exhibition were used to adapt a car that can transport Tadeáš and his electric wheelchair. 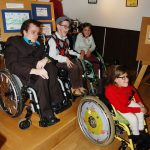 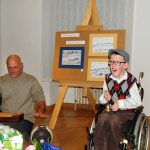 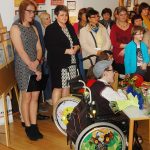