It is modern, interactive, specialized, and up-to-date “in the productive age”. The Museum of Special Education in Levoča opened its doors on November 16, 1990. Thirty years since its founding will be remembered with a rich experiential program in September. It will last the whole two weeks.

“On the occasion of our 30th anniversary, we will launch the event Two Weeks of Experiences on September 7 at the museum. We have prepared a varied and extensive program designed not only for school groups but also for the general public,” says Štefánia Petreková, head of the museum.

As she added, they decided to celebrate 30 years of the museum’s existence unconventionally but at the same time in a way, the modern and interactive museum would celebrate. We celebrate through an experiential and an interactive program. “We tailored it to our loyal and regular fans, visitors, families with children, professional and lay public. We believe that everyone who wants to celebrate our anniversary with us will choose from the program. The program is ready from September 7 to 18 weekends and holidays included,” Petreková concretizes.

There are tours of the museum’s interactive exposition with lectures, in addition to educational-experiential programs focused on Braille, finger alphabet, sign language, Lorm’s tactile alphabet, sensory organs eye, and ear, which are intended mainly for school groups. There is also the main program of the whole event.

Singer Katka Koščová will make the atmosphere more pleasant in the museum. She will be accompaniment by a piano. Daniel Špiner plays the piano. The concert will take place on September 9, in the morning. “Her music tends towards musical styles such as chanson, jazz, folk, and while writing her lyrics she is also based on the Slovak folk tradition. The charismatic singer will present herself to the audience by choosing songs intertwined with the stories of the blind Mimi and her friend Lisa, the deafblind Helen, or the deaf girl who found herself at the disco,” Petreková explains.

We will be creative on September 11. A workshop awaits children. Paint a cheerful T-shirt, bag, or cap, and thus recycle an old piece of your wardrobe. The pupils of the 1st grade of all primary schools, blind and deaf in Levoča can take part.

“We will unite generations in the museum over the weekend. We have prepared free admission for all grandparents if they visit the museum accompanied by their grandchildren; they can also take part in a competition with worksheets, which are a complete novelty in the museum,” head of the museum inspires the visitors.

The end of the second week of experiences will also be fairytale-like in the museum. The fairy-tale characters Mimi and Líza, Heidi, the main heroine of Zuzka, autistic Daniel, and others will come to life. Visitors become absorbed in the reading and hearing in those stories together with Evka Cibulová-Ryššáková, Aďka Brnčalovová, Matej Babej, and other actors, natives from Levoča who lend them their voice, at least for a while.

Two weeks of experience in the unique Museum of Special Education in Levoča were sponsored by the Slovenská sporiteľňa Foundation. “It starts with an educational and experiential program on September 7. The educational program is called Braille, how we don’t know it, and we continue with other activities. Come to celebrate 30 years of the Museum of Special Education in Levoča. Don’t forget to book an entrance to the interactive exhibition tour. Join the educational-experiential programs, performances by Katka Koščová, the Portal Theater or Reading with Actors,” Petreková summarizes and invites. 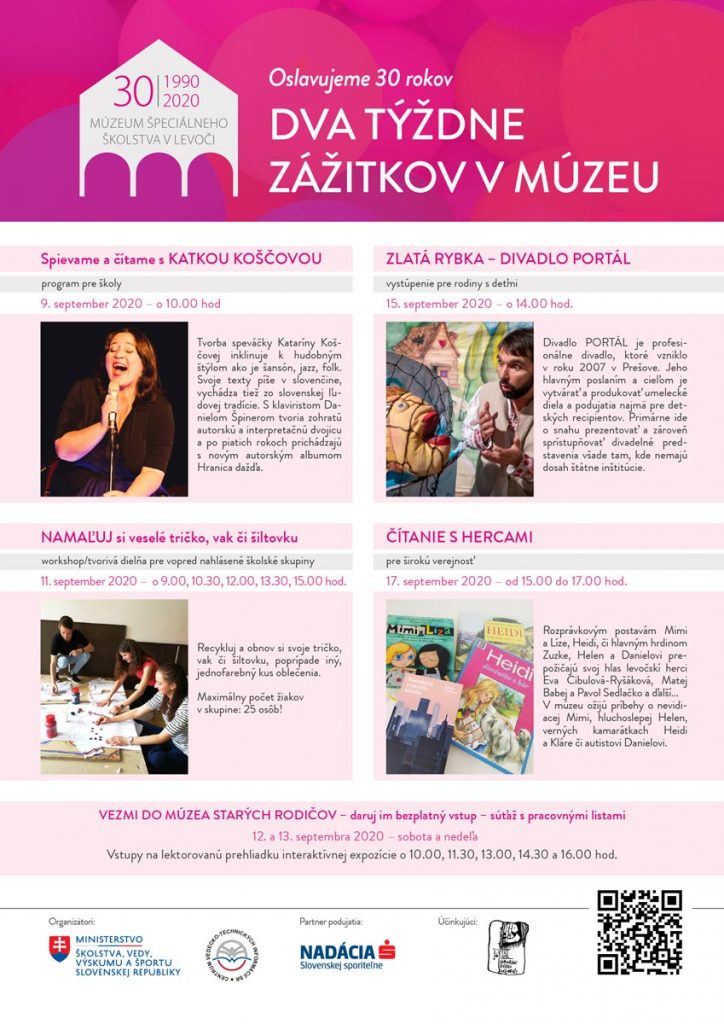 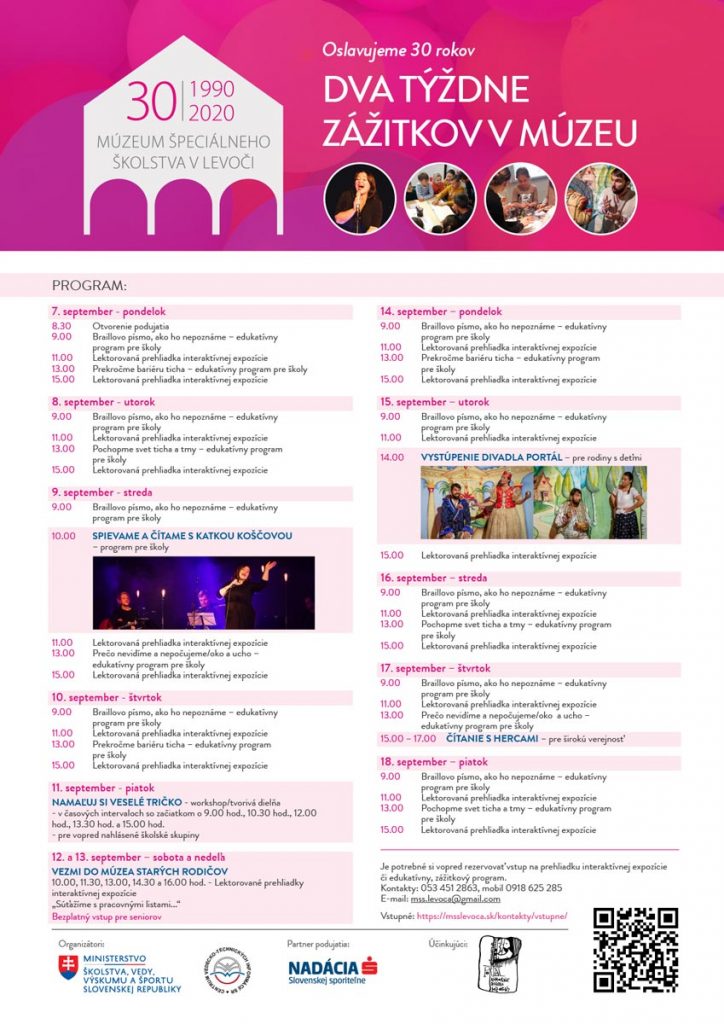